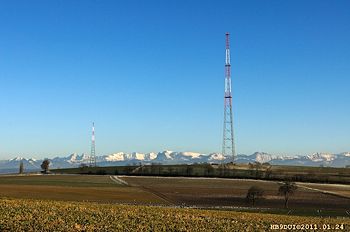 The signal has been received in various places in Europe and even in Sweden and Latvia. It is impressive considering the low transmitted power compared to normal broadcast DRM transmission that uses kilowatts and also considering the antenna that is not designed for such frequencies.

Credits to Yves HB9DTX, Stan from Maxxima, the HB9MM amateur radio club and Swisscom for lending them for a month such a great antenna. At least Sottens will have gone digital before dying. It shows also that DRM transmission can be done with limited equipment (apart from antenna), an interesting thing for local or community radio. Mathias HB9UFQ