If you try to use this card under 400 Mhz you need at least to change the inductances value of the PLL VCO as indicated in gnuradio wiki (RFX400 modification). It won't lock outside the original band otherwise. According to the chip data-sheet the correct value to operate on the VHF band III is around 22 nH.

Here's a table showing the range of operation (Hz) depending on the inductance value (derived from ADF4360 formula):

Here's the output spectrum of the RFX400 after VCO modification:

We see that working below the original board band will require to change the value of the on-board lowpass filter in order to kill the upper harmonics (that are now under the cutoff frequency of the filter, around 500MHz). The signal with the blue square is the wanted signal while the signal with the red marker is his first harmonic (in the original RFX400 band). The ratio between the in-band signal and the first harmonic is also degraded by the fact that we didn't change the final amplifier stage (RF2250 from RFMD, designed to operate from 300MHz to 3GHz), further improvements needs to be done...

Let's now have a closer look at the inband signal: 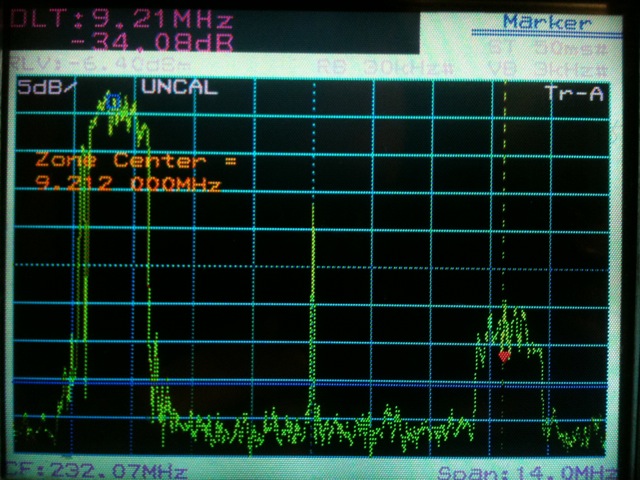 The LO (local oscillator) leakage (center carrier on the picture) remain too high and require a strong attenuation before putting on the air this signal.

As the signal center frequency (modulated group of carriers from the OFDM signal) coming from the DAC's is quite low (4,7 Mhz) it stays too close to the LO making it hard to filter efficiently. Strong filtering would also probably affect the linearity of the OFDM signal.

We also see that the upper beat signal (LO + 4,7 Mhz) is visible at 30 dB under the lower beat (LO – 4,7 Mhz = wanted signal). This comes from a balancing problem between the two inputs of the quadrature modulator (DC offset ? Averaging in the FPGA when computing the complex signal ? Resistors precision after the DAC's ?) This need to be investigated ...

Update: For the RFX400, the command to change the offset between the LO from the PLL and the DAC's signal at the input of the quadrature modulator is: device.set_lo_offset(freq in Hz)