Once you know how to generate a DAB signal with the RaspDAB set up you'll be interested to know how to get it amplified so you can reach a wider audience. The block diagram of a basic DAB transmitter is shown below: 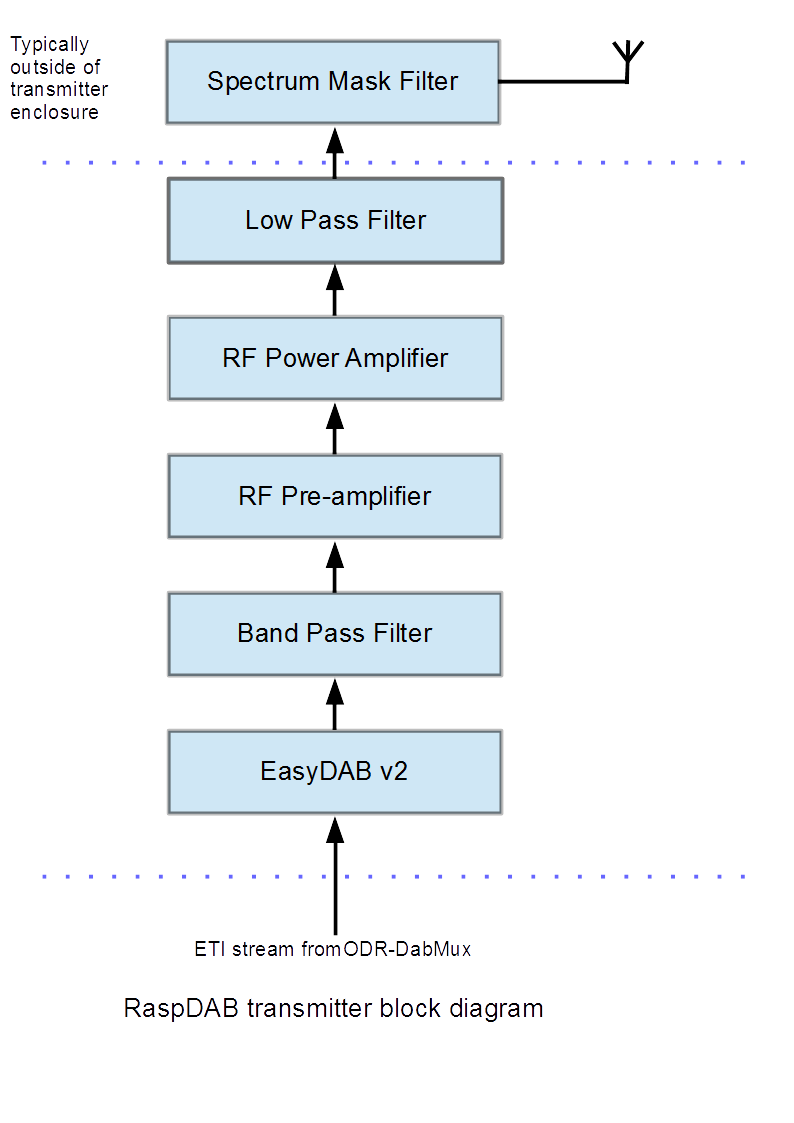 We'll discuss this from bottom to top, starting with the EasyDAB board which you will have come familiar with. Actually this set up is pretty general, so in stead of the EasyDAB board you could also use a HackRF or any other solution to generate the DAB RF signal. All of these "DAB Modulators" will receive the ETI stream from the ODR-DABmux software multiplexer, and construct the DAB signal based on information in the multiplex definition. Typically the RF signal is still at a pretty low level, some tens of milliwatts.

Before actually amplifying the signal, we better make sure we don't amplify unwanted signals. These would just interfere, and due to the inherent unlinearity of the amplifiers lead to additional intermodulation distortion. Therefore a band pass filter is to be used between the DAB modulator and the RF pre-amplifier, letting just the DAB signal pass and filter out - to the extent possible - anything else. As you will see later, this is not as easy as it sounds...

In the actual RaspDAB transmitter that was built as part of this project there is an additional 10 dB attentuator after the band pass filter, to enable a better granularity in amplitude setting of the EasyDAB board. The pre-amplifier stage used has a fixed amplification factor, and to keep operating in the linear amplification range we need to attentuate the signal. Otherwise we would introduce intermodulation distortion too easily, and that is something we like to avoid as much as possible. A clean DAB signal at moderate power is better than a distorted one at 'high power', as much of that 'power' will be in signals that interfere with the signal you want to receive, and will only make the error correction less effective as it will have to correct errors introduced by unwanted signals from the transmitter itself rather than interference from the environment. So you waste a lot of power and will get a worse result. In developing the transmitter it is important to inspect the spectrum of the signal after every stage, to ensure you keep it 'clean'.

The pre-amplifier is to pump the DAB RF signal up to a level suitable for the RF power amplifier. Typically this ranges from some hunderds of milliwatt to some watts, depending on the RF power stage used. Nowadays these RF power stages use advanced MOSFETs, which are capable of amplifying the signal by some 25 to 30 dB at high power. To keep them operating in the linear range one should set the quiescent current (the current flowing through the amplifier when no RF signal is applied) to a value that maximizes the distance between the top of the DAB signal and the 'shoulders'.

To illustrate what is meant by this take a look at the spectrum shown above. You see the top of the DAB spectrum is flat, with steep sides going down about 30 dB, at which point the 'shoulders' start. This was an early inspection of the transmitter's output, before the quiescent current was optimized. The 'needles' reaching down are due to the synchronization 'null' signal of the DAB signal. After optimization of the 'shoulder distance' and using a spectrum analyzer with a sufficient dynamic range (which are not that easy to find...) the spectrum looked like this: 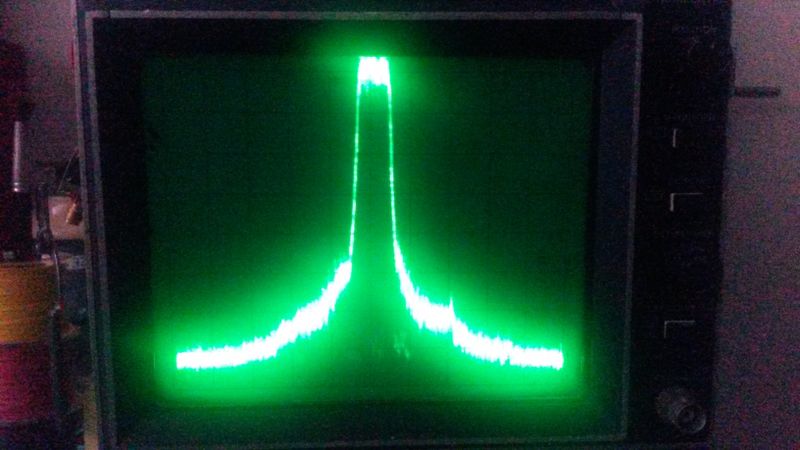 You see the DAB signal flat top, with the noise at the bottom at about -75 dB relative to the top. The horizontal scale is 1 MHz/division. Let's compare this with the theoretical DAB spectrum from the DAB specification [1]: 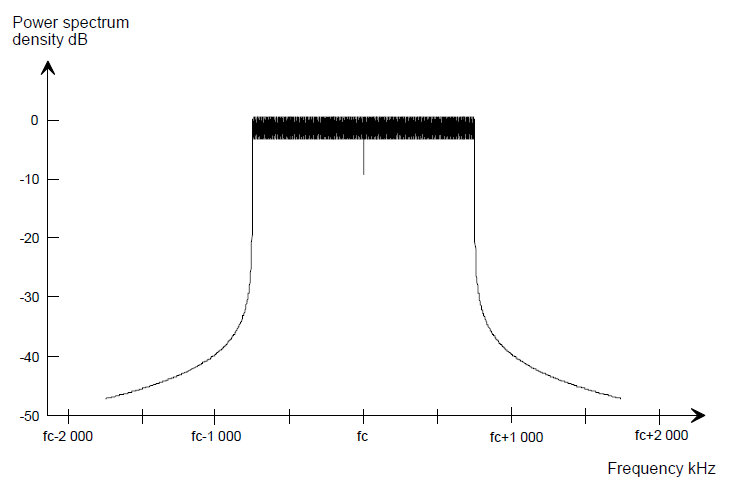 Before you can put the signal on air, still some filtering is necessary. First of all a Low Pass Filter to remove any harmonics that may be present at twice, three, four...etc. times the center frequency. Typically this is where the signal leaves the enclosure of what is referred to as the 'DAB transmitter'. But then there's the 'Spectrum Mask Filter'...

In the DAB specification [1] the recommended spectrum mask is shown in section 15.4: 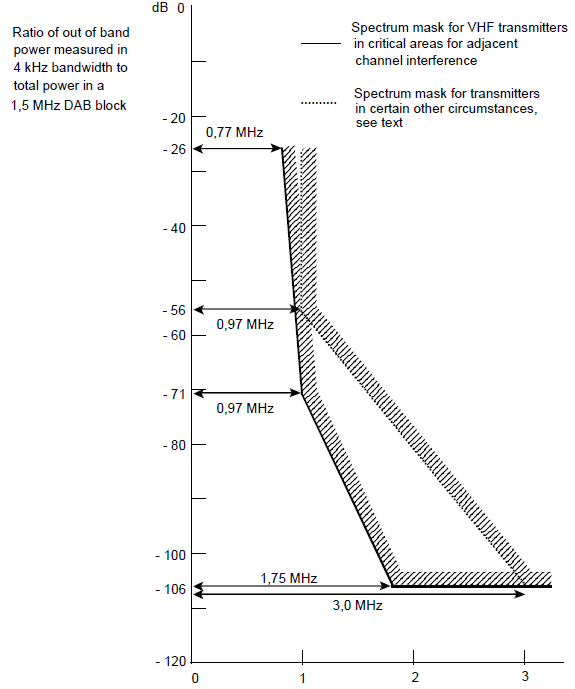 As the theoretical DAB spectrum shows, it is actually not possible to satisfy the mask requirements without a mask filter. So you need a filter with a wide (1.54 MHz) flat pass band and then very steep edges to filter out the components beyound +/- 0.97 MHz of the center frequency. Typically cavity filters are use for this, which are rather bulky specialist contraptions, and are therefore located outside of the 'DAB transmitter' enclosure. If the transmitter has been designed and optimized carefully it might be possible to reduce the spurious signal levels enough to be able to satisfy the non-critical mask requirements with a helical filter design.

After the mask filter the signal can be fed to the antenna, which requires a description of it's own.